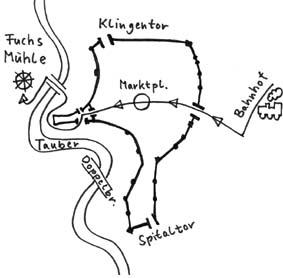 On foot or by bike from the station Rothenburg o.d.T.

If you do not have light luggage, you can reach PensionFuchsmühle by food form train station, the walk takes about 20 to 30 minutes.
With heavy luggage you should take a taxi. The road from the castle garden down to the valley is partly very steep. Bikers better should push their bikes.
At the travel agency in the station you can ask for a city map during the opening times.  PensionFuchsmühle is located on the city map close to “Z” (Toppler castle). 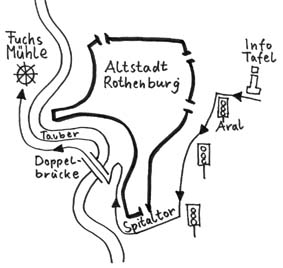 By car from the highway

You leave the Autobahn (A7) towards Rothenburg and reach

From Vorbachtal down to the Tauber.